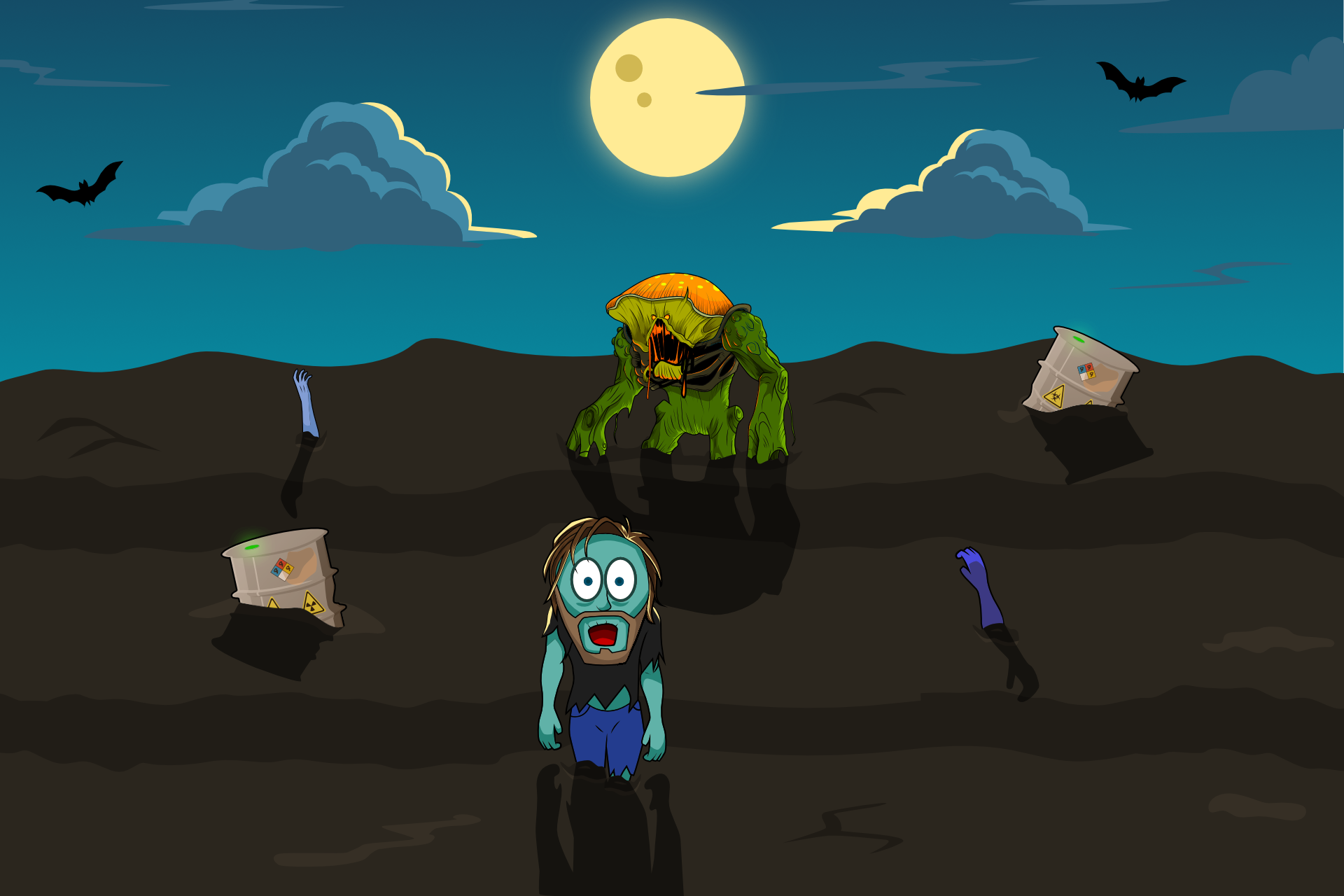 If you find yourself struggling to get things done, simply take a step forward. It’s good advice in general and really potent advice if you are stuck in toxic sludge and being chased by a mutant.

So the other day I was out in a field searching for bones, as one does, and I suddenly realized I was not where I thought I was.

Bones is the name of one of the S.O.C.’s that roam around here. An S.O.C. is a sentient ooze collector. A sentient ooze collector is basically a pile of goo that is self-aware, but spends it’s time collecting … well … anything really. The zombies named this particular S.O.C “Bones” ironically. Wow! That really needed a lot of explanation. I think I might have to sit out the rest of this post.

I had put my left foot forward and I heard the “gloop” of the toxic sludge as my foot landed, followed by the prolonged “sluuuuuuuuurp” of suction as I tried to remove it. The pull caught me off balance causing me to thrust my right foot even further into the muck.

I shook my head in disbelief, considering how best to turn around when I heard the low moanings of Goliath, the lumbering mutant. The animated collection of driftwood, moss, and other debris was coming at me, and here I was in toxic muck.

I had no choice. My only option was to take a step forward.

Okay, I had to come back for this one. Obviously, they are mutants, but it’s the “lumbering” part of their name that was important at this moment in the story. Yaki’s sharp to be sure, but sometimes zombie sharp isn’t all that sharp.

The sound of the simple mud made my heart light up. My foot was out, and with another “Sluuuuuuuuurp. Squish.” I was free. Then I did what any self-respecting zombie would do, I ran like my butt was on fire, leaving Goliath in the dust… er… muck.

There are a lot of times in life when we’re stuck in muck. Every step we take seems slow and the end seems out of reach. We sometimes might even feel pointless or unimportant in the midst of it all.

But everyone matters, and success is for everyone, even when we don’t feel like it. To be successful, we must move forward. If we just sit there, eventually a mutant will come and attack us. Hmmm… that’s not a great part of the metaphor here. Let me try again.

We can’t sit still, because life keeps moving forward. We have work to do, chores to take care of, responsibilities and more chasing us down. The way to make progress when we’re stuck in the muck is simple: take a step forward.

Sure a step doesn’t seem like anything, but as they say, the journey of a thousand miles begins with a single step.

If you find yourself stuck in the muck, don’t worry about all that you have to do. Just focus on that single step. Take one after another, focusing on the one you’re on, just like when you take a task and do it daily. Eventually, you’ll get out of the muck and leave your lumbering mutant behind.