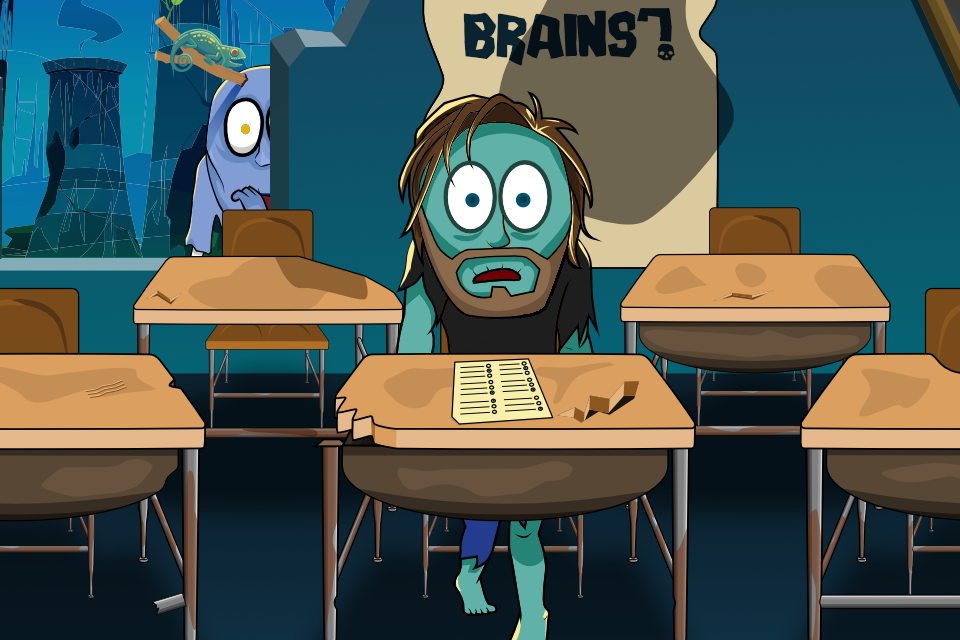 If there was ever a test that threw me off in zombie school, it was multiple choice. I remember the test quite clearly “Who has the most delicious brains?” Then it listed 25 options. This may be why I like single choice vs multiple choice questions.

Brain Eating wasn’t the only class he struggled with.

What I do know is that I realized that when it comes to single choice vs multiple choice, single choice wins regardless if it’s on a test or in life. Madcon demonstrates this perfectly.

We all know zombies are slow, but people can have their own hangups too. I’ve seen it with the mad scientists when they get together at Madcon. They show off their “Inators”, plan world domination, share the advantages and disadvantages of their daily routines, and come up with some brilliant scientific breakthroughs.

At least I think they’re brilliant. I don’t understand them, and that’s what I’m basing that on.

Still, regardless of their ability to create and invent, there’s one time they’re all stymied. Or they were, until Bob helped them out.

A Stalemate and a Stale Mate

Every year the Inator contest at Madcon turned into a brawl. After showing off the Inators, they would take a vote. Inevitably there was no clear winner, usually with dozens getting the same number of votes.

The event would eventually turn into pandemonium with blasters, rays, and toxic gasses filling the room. A typical Madcon would thin the attendance by 10% before the event was over. In other words, it was a typical mad scientist party. For them, that’s how to make things fun.

At this point I have to point out that Yaki’s title “A Stalemate and a Stale Mate”, is referring to a passed friend as a “stale mate”. I would say “it’s a thinker”, but we both know that’s not true.

It wasn’t until Bob inadvertently made them see the difference in single choice vs multiple choice that things changed.

Bob and the Thinning Inators

There was a Cheat-Inator (disqualified for obvious reasons), a Slap-Inator, and a Work-Inator, which created more work for your nemesis. There was even a Deinator-Inator.

It was hard for everyone to decide on a winner, mainly because most every mad scientist brings an Inator and since everyone votes for their own Inator, it’s a big tie. A few years back a handful of mad scientists realized they could bring a lab assistant to Madcon who would vote for them, making a smaller, but still infuriating, tie.

Then Bob fixed it all. As he was sweeping the stage, he knocked into the Deinator-Inator, turning it on and swinging it wide. It took out all but the DeInator-Inator and the Squid-Inator.

Having only two choices made the choice easy. Surprisingly, despite it’s powerful demonstration, the Deinator-Inator lost. And the event still broke up in pandemonium. Some habits are hard to break.

Despite that fact, they did change the Inator event at Madcon. Instead of having one big vote, they had a committee that would narrow the choices down to three. Then everyone was able to select from the narrow choice.

If you struggle to make decisions between many choices, that’s normal. The struggle between single choice vs. multiple choice is well documented. Don’t ask me where. I’m just a zombie.

Too many choices is a bad thing. Narrow choices down to just two or three to make your choices easier.

As for Madcon, they still have fights every year, but it’s not during the Inator vote. Everyone loves that. They have fights while selecting the Inator committee. The good news is, if they keep it up, pretty soon the selection process will be single choice vs the multiple choice they have today.