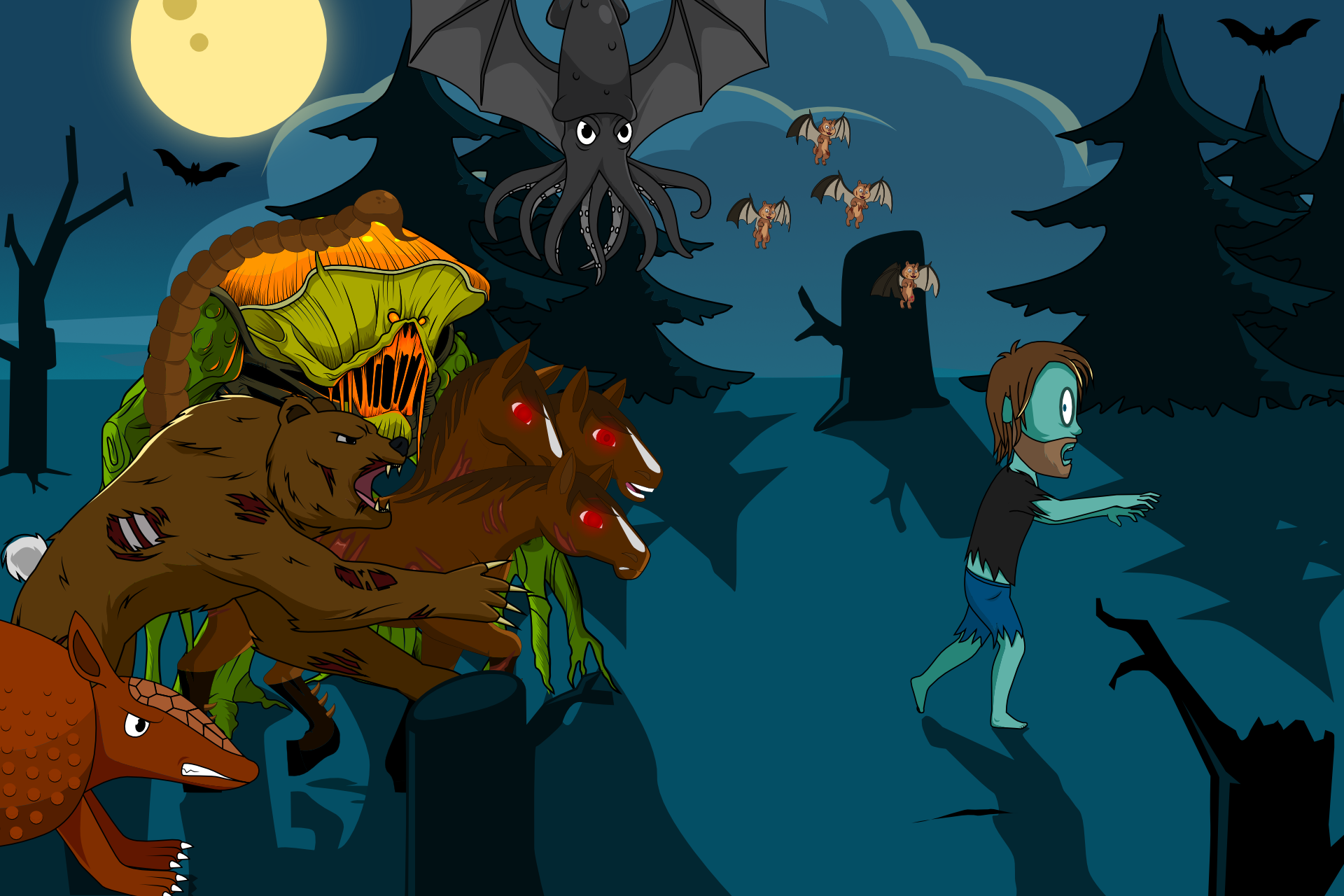 You know the best thing about being a zombie? Me either. I don’t really think about it. Most of the time I’m just avoiding this monster or that toxic spill. Often I find life is more about running from problems than living.

The Life of a Zombie

Have you ever had your head bitten off by a giant rat? Me either. No one has. At least not that I know of. It sounds terrible.

I mean, we don’t have giant rats in the post-apocalyptic version of earth, but if we did, and if one bit off my head, that would suck.

It would suck almost as much as those giant beasts with the long thick trunks that inhale zombies. Those things are dreadful. I mean, they’re only in my dreams, but those dreams are terrible. Ugh. What kind of world has those things? I mean, no world does, but if a world did, what world would that be?

Listening to him go on and on seems like a perfect time for a trans-dimensional movie quote: “truly you have a dizzying intellect”.

This is why I’ve started running from problems. Because there are so many.

So I find myself running from my problems, and sadly, they just keep coming. I run and I run and they chase and they chase. It seems never ending, so much so I can’t help but invent new ones.  If I didn’t, someone else would, right? Oh, holy crap! What kind of person would invent new horrors? What if I’ve already met that person? What if they’re stalking me!?!

There seems to be problems all around. I guess I’m stuck with it. I guess that’s the way life has to be. I guess I will just forever run and they will forever chase. That seems to be the only possible way things could go.

Unless I run faster.

I was so sure he was going to figure this out. Sometimes zombies are slow… particularly on their feet – which begs the question: how fast is he planning to run?

Wait. Maybe… maybe running from problems doesn’t ever change anything. Maybe problems will always exist and the mere fact that I face them makes me more capable of facing more of them. Maybe being afraid of problems only makes me invent more. Maybe problems aren’t just difficulties, but they are challenges that we can solve. Maybe the more we solve them, the better we are not just at our problems, but at life. Maybe I’ve said “maybe” about 10 times too many.

I guess it’s time for me to face my problems. Regardless of the outcome, it has to be better than running from them constantly.

Face your problems. It may not always be pleasant, but it will make you better and more able to face future problems. Plus, chances are they won’t impale you with a giant scorpion tail, so… win/win.
EXCLUSIVES AND MORE
Do you feel your dreams have died? Did you bury your goals long ago? Are your aspirations six feet under? Reanimate your dreams with Zombie Goals!