Having Too Many Choices Is a Bad Thing 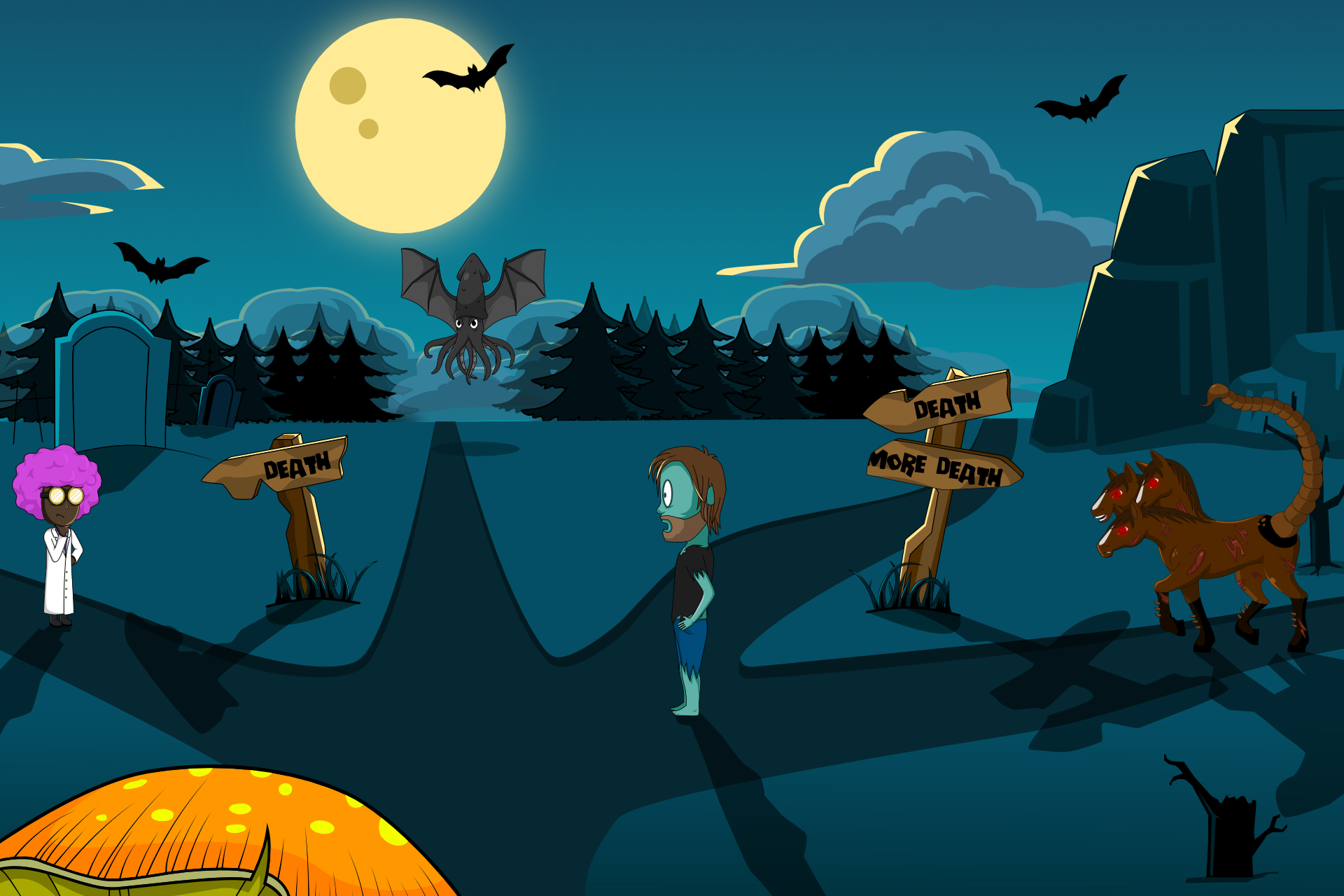 If you have ever struggled with a decision between being chased by lumbering mutants, stung by scorses, dropped from perilous heights by flying squids or being experimented on by mad scientists, you know that having too many choices is a bad thing.

There’s a way to make it much, much easier.

A Clustermuck of Terrible Choices

The other day I was walking back from my afternoon class of Zomba. It’s kind of an aerobic exercise for zombies except all we do is stumble about. Now that I think about it, it’s pretty much what we do all the time. Hmm… I guess it’s really just a social club then.

Anyway, on my way back, I saw DoC in the distance with that look in her eye. It’s the kind of look that says “I was wondering what it would take to make zombies glow.” She has very expressive eyes.

As I started to back up, I noticed a scorse behind me – a distance away, but still a distance easily covered by a scorpion-tailed horse.

I turned to my right only to see Goliath, an animated, mutated collection of driftwood, fungus, and other debris lumbering toward me. Immediately I turned 180 on my heel only to see a flying squid approaching from the opposite direction.

I froze. What was I to do? It was a clustermuck of terrible choices, and I can tell you first hand that having too many choices is a bad thing. I almost soiled myself, but luckily I saw the deep mud before I fell in it.

The Problem with Too Many Choices

So often we are presented with a wealth of choices. We think that’s a good thing. For instance, what if, instead of just having one flavor of zombie jam, we have 20 to choose from?

Zombie jam isn’t jelly. Yes, you put it on toast, but it’s made from musician brains and it plays tunes in your head. My favorite flavor is punk rock.

Sure, choosing from three choices is easy, but choosing from 20 is overwhelming. That’s why having too many choices is a bad thing, just like when you have to decide what type of pain you’re going to have to deal with – by experiment, sting, mutant, or squid.

Luckily, there’s an easy way to deal with too many choices.

How to Deal with Too Many Choices

That’s why I started to think about which options I really hated the most. The scorpion sting was too much. It was definitely out. And the experiments suck, mainly because you never know what they will be. Once it was down to two choices, I could think clearly. In fact, I could think so clearly I saw a choice I hadn’t seen before.

With all four perils nearly equidistant, I let out the loudest “brains!” I could. They all turned their attention toward me and made their way in a run, lumbering gate, gallop, and flight. I immediately fell forward, my feet still and my body stiff as my head fell toward the ground. The slurp of the deep mud pulled me in slowly as I disappeared into it.

Within seconds I could hear all four of the creatures engaging near me. A scuffle ensued. There were screams, the flapping of wings, the braying of the scorse, and the thumping of wood. After a few minutes, the only thing left to hear was the sound of a squid flying off and a lumbering mutant thumping its way home.

I don’t know what happened for sure, but I know that I made it out in one piece – thanks to zombie paste.

Too Many Choices Is a Bad Thing

It’s hard to focus when there are so many choices. Our attention is split too many ways. In order to focus on what you do, you need to narrow down what you focus on, particularly when it comes to decisions.

Whenever you are presented with more than three choices, quickly get rid of all but three choices. Making a choice from what’s left will be much easier.

We often have to change the way we do things in order to maximize our results. For instance, if you focus on how to create systems instead of goals, you can find a lot more success in achieving your dreams. In the same way having too many choices is a bad thing, but it’s easy to fix when you simply narrow down your choices as quickly as possible.

Keep your choices simple, and you will find that decision making becomes a lot easier. You may even find solutions you never contemplated before.