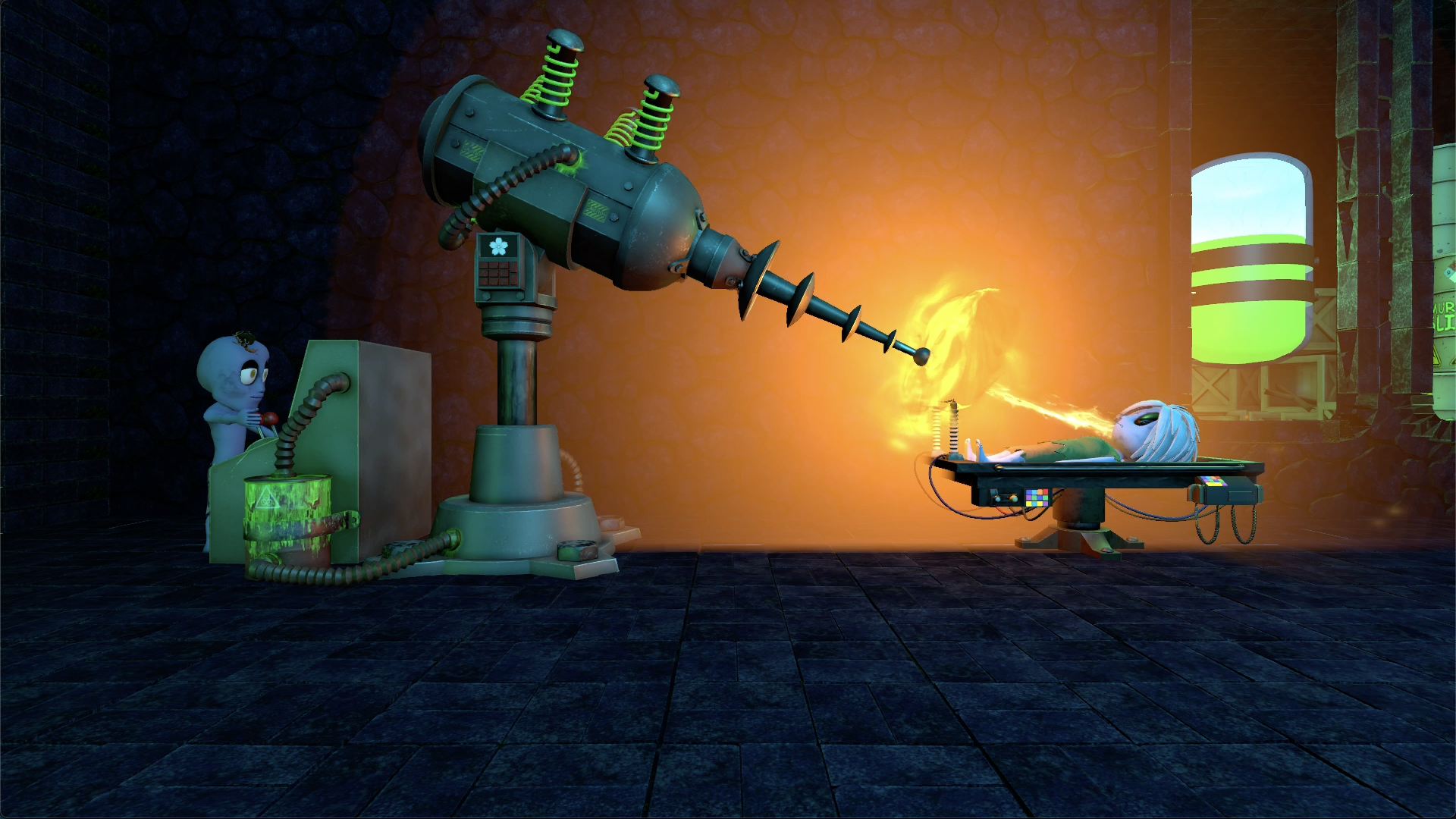 If you enjoyed last week’s sneak peek of DoC’s lab, you will love this continuation where you get to see how zombies are reanimated and enhanced.

No sneak peek of DoC’s lab would be complete without the parts of the lab that bring dreams back to life! All these people who’s dreams were cut short by unexpected circumstances – DoC gives them a chance to see those dreams revived.

In order to prepare the bodies for reanimation, DoC suspends them in a special reenergizing solution. Oddly enough it’s the same viscous goo that powers the fuel cells.

Once we’ve located a human to link with, the un-undead participant is placed on the reanimation table where DoC carefully and meticulously uses the Dream Reanimator™ to shoot them full of an insane amount of reanimation rays.

This takes the participant from being un-undead to being simply undead. Like the song says “everyone’s frightened of the Dream Reanimator™… but it can awaken your dreams once more.”

Once the lifeless body becomes a full blown zombie, they are ready for the mental connection with a human in your world using the Linkinator™, but they’re not done! DoC still has an enhancement section to boost the ability of the zombies and their level of self-control.

Zombies are great and all, but a bit on the “I have no idea what’s going on” side. As the link between a human and the zombie grows stronger, the zombie is more able to do the basic tasks that humans take for granted. After DoC researched how long to build a habit, she realized that it takes 21 days to build a habit with her techniques. That’s why DoC has a couple enhancement machines to boost the success of the link over time.

Zombies love trinkets. And shiny things. And chasing lights you shine on the wall. They’re kind of like giant, upright cats. Their brains will regrow, but this takes work. In the meantime, trinkets help inspire the zombie toward greater things.

To that end, DoC has created little trinkets called achievements that zombies can earn for accomplishing tasks. This is a strong motivational enticement to the newly undead.

Additionally, as the human/zombie link grows stronger, the zombie will hit certain milestones. DoC can then use the Zombooster™ on the zombie to increase the results that reaching the milestone has on the participating zombie.

In short, you can see from this sneak peek of DoC’s lab that she’s put everything in place to maximize the results for the zombie and, in turn, the person to whom the zombie is connected.

Do you feel like a zombie? Do you feel like you’re stumbling through life haphazardly, wanting something you can’t have and have no real idea of how to get it? Do you want to live a life rich and full, and be the person you want to be? You can do it! Yes, you!

DoC’s patented* blend of reanimation technology, trans-dimensional, zombie-human link, and success boosting accessories, combined with several proven psychological motivators and positive habit-building superpowers can help you become the person you want to be.

Are you ready to find the easy way to build strong habits and have a blast doing it? Then sign up to become an honorary zombie today. It’s free, and you will get advanced notice of in-game sneak peeks, easy habit tips, and special in-app items. What’s more, you will have a chance to be in the beta, as well as hear first about release dates and more.

Sign up today, and enjoy all the possibilities that a new life gives you.

* In our world, patenting is really simple as we don’t have any bureaucracy… or government to speak of. In order to patent something, you just stamp it with the word “patented”.