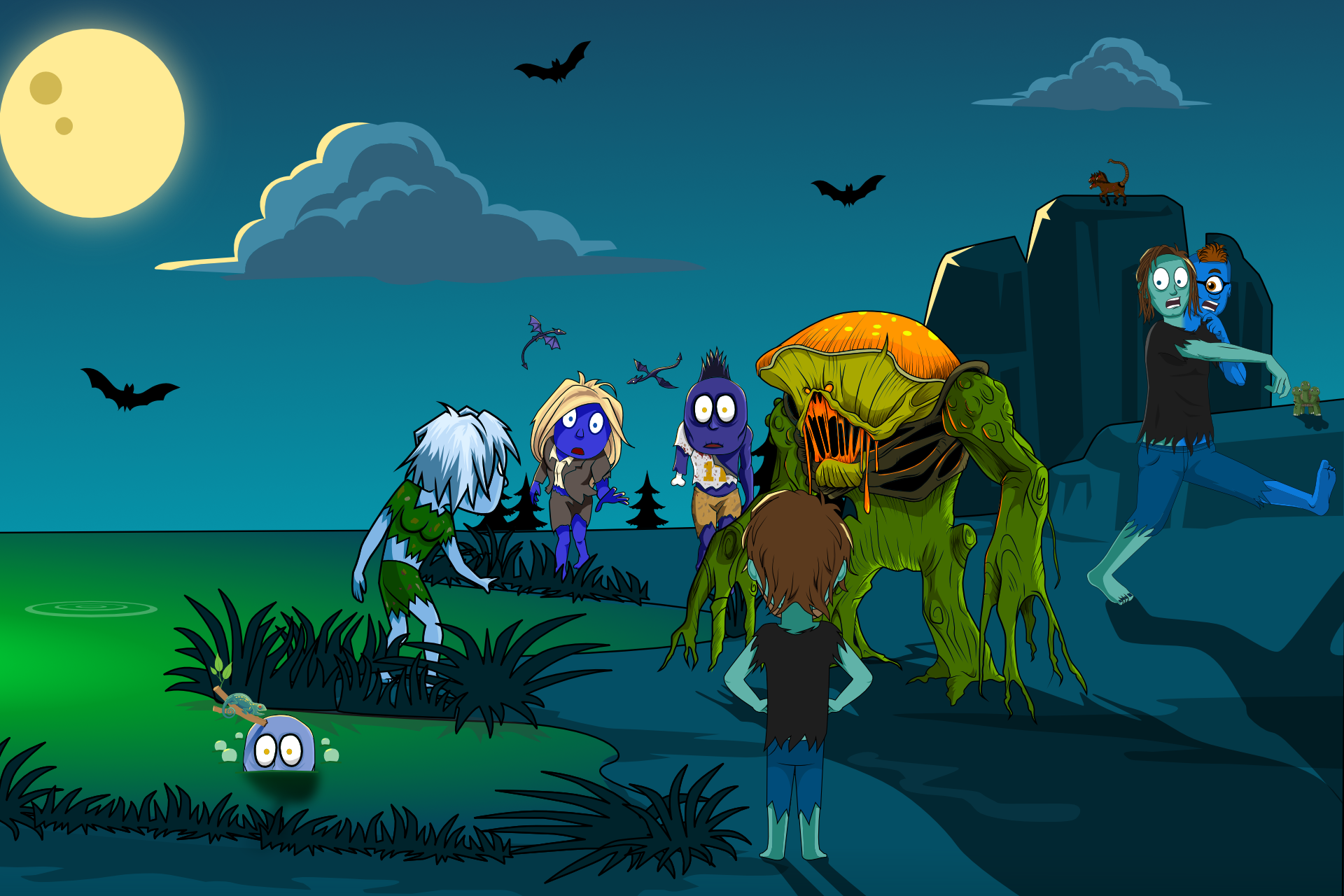 As someone who’s lived a long long time, I can tell you first hand: if you want to turn bad habits around, you have to know one secret and 3 keys to overcoming negative habits.

A Common Goal – Sort Of

Everyone has negative habits they want to get rid of. I have a habit of going slack jawed and drooling every time I walk down the street. My friend Okl’n has a habit of walking in the graveyard at night and getting frozen solid. Flying squids have a habit of grabbing unsuspecting victims, taking them high in the air, and then dropping them to earth. We all get it.

Flying Squids don’t get it. Their idea of a negative habit is missing someone they were trying to grab.

Overcoming negative habits requires one special secret even before you use the 3 keys. The best way to explain it is to talk about Goliath, our local lumbering mutant.

Goliath loves to grab zombies and throw them into the toxic ooze we call Larry Lake. When he first started doing this, we tried rescuing whoever he grabbed. The problem with that is that it left Goliath’s hands empty, so he just grabbed someone else.

Despite the propaganda of some of your more recent films, zombies are not quick.

As we zombies are quick thinkers, we soon devised a plan.

Zombies are not quick thinkers. This plan took them decades to devise.

It’s this same principle that is the secret for overcoming negative habits.

The thing is if you’re a smoker, you think about smoking all day. Sure, if someone puts you out or the toxic ooze that was on your skin comes off, you may stop smoking, but you won’t stop thinking about it.

When something has become a part of your life, like a habit, you can’t just remove it. It’s like Goliath. As soon as you get rid of what’s there, its hands are empty and it’s looking for something to fill that void. It leaves what’s known as a habit vacuum. You’ll either start that negative habit again or pick up a new one.

If you want to start a new habit, the first thing to do is make it easy. Too often we look to become amazing overnight, when all we need to do is move forward.

It’s better to play a new instrument 5 minutes a day than try to do an hour. Changing your schedule to accommodate an hour will be overwhelming and frustrating, making building that new habit harder. Doing it 5 minutes a day will make it easy, and in a couple months you will have a new habit.

Overcoming negative habits means finding a positive habit to replace it with by making it easy. Then do it consistently.

To build the habit, you must do it daily. That’s the way habits are made. By doing it every day, it becomes a part of who you are and your identity.

Finally, add fun to the activity. This is how you take control of your life and have fun doing it.

If you are cleaning every day, add some music. If you are picking up debris in the yard, make it a race to see how quickly you can pick up 50 items. If you are writing, add a reward for accomplishing your writing goal, like doing something you enjoy or a small treat.

When you make a task easy to do, do it consistently, and add fun, you make building a positive habit simple. These are the 3 keys to overcoming negative habits.

That’s it! It’s what we call easy, streaking fun. It’s the way to change negative habits into positive ones and avoid the lumbering mutants of grief that will try to grab you and hold you and cause you… issues… and make you struggle… with the stuff.

Zombies are not the best at metaphors. Still, it’s a good time to choose one good habit you would like to start, plan how you can make it easy, and use it to replace a negative habit.
EXCLUSIVES AND MORE
Do you feel your dreams have died? Did you bury your goals long ago? Are your aspirations six feet under? Reanimate your dreams with Zombie Goals!